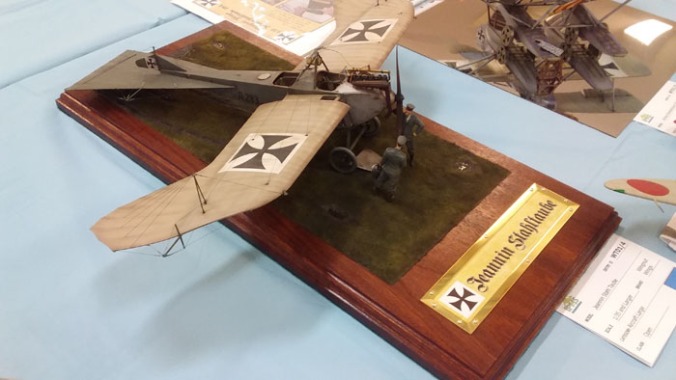 For those of you who are unaware Wings & Tracks is the first model comp for the year acting as a prelude to the mega Model Expo in June. This event showcases a collection of aircraft and military vehicles and almost anything related to the above such as dioramas and figures. Awards are covered for the usual place categories common with many competitions, but what sets this show apart from the others is that it has a theme related to aircraft and vehicles. This year’s theme for the ‘Golden Wing’ award was ‘Floatplane & Amphibious Aircraft’ and for the ‘Golden Sprocket’ award this was ‘Amphibians – Any AFV/Vehicle’.

The show itself was well attended including traders Brian from Wargame Miniatures and Scott from SMS. These guys put in a lot of effort and time to be at these shows and without their support and time these shows would not be what they are!

Drum roll please…………. and the winner for the ‘Golden Wing’ was our very own Martin Reid with his superb Wingnut Wing 1/32 Hansa-Brandenburg W.12 Early. Martin also took out 1st in its category for his Wingnut Wings Taupe which also won the ‘Entrants Choice – Best of Show’!. This is a fantastic effort and well deserved, as I know first hand the amount of work Martin has put into these kits.

Click here to see pics of this years show.

Today saw the return of the Tyabb Airshow in Tyabb Victoria which included a great selection of  WW1 and WW2 Warbirds, RC displays, Static military vehicle displays, and various aircraft flybys. The weather was around 24 degrees with cloud cover which made a comfortable day. The crowds were large but there was plenty of room to move around and to take advantage of the food stands and displays around the aerodrome.

My favorite aircraft of the day were the Sopwith Snipe,and Sopwith Pup replicas as well as the CA-12 Boomerang. There was even an aerial display by the only flying Lockheed Hudson and was a great sight to see. The RAN MH-60R Seahawk took to the sky and was very impressive and large. The Grumman Avenger was there again this year and if you have ever built one, you would be impressed at how massive it is on  the ground even with its wings folded. For the auto enthusiasts there was a classic car show with some real beauties on show. There were several military displays that were kind of setup as living dioramas which were amazing.

This meeting went very well and was a lot of fun , especially as we had a pizza fest. Here are some pics of what was on the table.